Saturday morning, July 13, 2013, Dan awoke to anyone’s worst nightmare come true—a doctor with bad news. Dan awoke startled after a night out with friends by his phone vibrating with two missed calls and a voicemail from his pulmonologist. It was a morning that would change his life forever. Dan had been seeing a lung specialist to address the shortness of breath he had been experiencing for the previous few months. He felt as though he was having occurrences of asthma, but the use of inhalers was not helping. After a few inhalers & few doctors, his father recommended he see a specialist in NYC.

Dan started seeing Dr. Weinberg mid June 2013. He took all sorts of tests and even had Dan run on a treadmill with a chest monitor. All results pointed to Dan being healthy with no signs of asthma or fluid in his lungs. So, as you can imagine, Dr. Weinberg's call on that gloomy Saturday morning was not a typical follow up- few doctors call with good news at 9 am on a weekend. He left his cell phone number and instructed Dan to contact him immediately. As it turned out, before Dan left his office the day before, he suggested they run some blood work to rule out anything the other tests were not catching. Sure enough, Dan's blood results showed a low platelet count, a high white blood cell count and that he was anemic. (This would explain why Dan had recently been bruising so easily)

As the color drained from Dan’s face he asked his doctor the questions no one wants to ask, "Doc, are you saying I may have the 'C' word”? Dr. Weinberg told Dan to get to Lennox Hill Hospital – North Shore LIJ in NYC as soon as possible. He was going to have his partner meet him at the Emergency room and run more blood tests to make sure there were no errors. We would continue the conversation from there. Dan immediately called his parents and gave them an update while trying not to panic. The plan was to meet his parents at Lennox Hill as soon as they could get there from NJ. He would drive in with his girlfriend and try not to over think things until they knew for sure what they were dealing with. Dan was admitted to the ER and met with Dr. Weinberg’s partner, Dr. Palka. More blood work was taken, vitals, family background and an overall checkup. Dan & his parents tried to come up any possible condition he could have that would not result in a cancer diagnosis. To no avail, it wasn’t asthma that was causing a shortness of breath, but the result of low red blood cells causing a lack of oxygen. That same Saturday, it was confirmed that Dan was diagnosed with Acute Lymphoblastic Leukemia (A.L.L.) As anyone can imagine, it takes some time to let the words "I'm sorry to say this, but you have cancer" sink in. Dan sat on the ER table completely mystified. How could he have cancer? He was healthy, in shape, and only 27! How was this even possible? He was angry, scared, and confused. He asked the doctor point blank if he was going to survive this. The reaction from the doctor was promising- the statistics were good, and Dan had lots of contributing factors in his favor; he was young, healthy, and strong- He could beat this!

Upon this diagnosis, a plan was put to action. Dan was admitted indefinitely to Lennox Hill Hospital and met his team of doctors, his main hematologist being Dr. Dana Shani. The game plan was to get him started on antibiotics and chemotherapy, do a platelet transfusion to increase his levels as well as conduct his first bone marrow aspiration test. This would provide a detailed reading of the severity of the cancer. Over the next few days, further results revealed that Dan had tested positive for the “Philadelphia Chromosome.” Not only would chemotherapy be required as a form of treatment, but also a stem cell transplant once he was successfully in remission to ensure higher chances of no relapse. The search for a stem cell donor would begin, and they start with any siblings. As luck would have it, Dan's younger brother Jason was a perfect match! At last, some good news. Additionally, Dan had to have an ommaya reservoir port placed underneath the surface of his scalp. This would be used for occasional chemotherapy that would be injected into the port to reduce risk of cancer hiding in areas of the brain; this also meant that the doctor was going to shave his head- since his hair had begun to fall out in some sections anyway. (Why not just shave it all, rather than wake up to clumps on your pillow!). If you see a bump on the right side of Dan’s head in some photos that is the port beneath the skin. Dan's first round of treatment lasted about 3 1/2 weeks. It shouldn't come as a surprise to know that Dan was several of the nurses favorite patients, always cracking jokes and trying to lighten the mood even on his worst days. He must have changed hospital rooms 3 times due to insufficient wireless connection. He made sure to stay positive and optimistic even when he wasn't feeling good or just wanted to go home! Dan is so grateful to Dr. Weinberg, Dr. Shani & her team for getting him thru to where he needed to be successfully and efficiently. After the first round of chemo was complete and successful Dan had his 2nd bone marrow to find out if there were any traces of cancer left. We received amazing news that the initial round had worked and Dan was in remission! Dan was not done with treatment (it’s not that simple) however, his platelet count was high enough for him to go home to continue the treatment as an outpatient!  Dan was released from the hospital on August 4!! Now, if you recall, the summer of 2013 was unbearably hot & humid in NYC! All Dan wanted to do the entire time he was in the hospital was go outside and get fresh air- it was hard to explain that the air was less than fresh during these days. However, Dan was the happiest he could be the day that he left the hospital- even shedding a tear when he felt the sunshine on his face.

Between the months of August and November 2013, Dan resumed with life as normally as he could. Although he had a port in his arm and had to check his temperature & insulin levels daily (due to certain medications he was on)- he was just relieved to be home and in his own bed.

Dan was able to work from home, see friends & family and was being treated for his 2nd and 3rd rounds of chemotherapy outpatient, going into the city 2x a week. He only was admitted once in early September for a few days as he spiked a fever and tests showed signs of pulminary adima and pneumonia. On September 26, Dan also met with his transplant Doctor. It turns out that Lennox Hill did not have a transplant department, but Dr. Shani worked very closely and highly recommended her colleague at Memorial Sloan Kettering Cancer Center, Dr. Esperanza Papadopoulos. We were optimistic to hear that Dan was going to be treated at MSKCC, however, the stem cell transplant was a very risky procedure with the strongest doses of chemotherapy, radiation and risks of graft vs. host disease post transplant. We also found out in more detail about the transplant process. Jason would have to undergo an extensive blood donation to obtain his stems cells but also remove his t-cells. This is called a 'T-cell depleted stem cell transplant'.

Jason would be hooked up to two machines, while the machine took blood from one arm it would remove the Stem cells and pump back the remaining blood into his other arm- like a cycle. (Clinical trials conducted at MSK had proven that a T-cell depleted transplant resulted in higher numbers of patients that did not experience graft vs. host disease).The blood donation was done over the course of 2 days, totaling 7 hours- Jason donated millions of stem cells.

Dan was admitted to MSKCC November 17, 10 days before transplant day. He received 3 days of intense full body radiation followed by 4 days of intensive chemotherapy. The idea was to bring Dan’s immune system down to nearly zero, essentially destroying it. The stem cell transplant would act as a reboot to his system. This is why post transplant recovery is so risky and important, because any exposure to disease or infection could result in a terrible complication or even be fatal. In addition, somehow Dan had contracted a bug that could be contagious to other patients with low immune systems. This meant any visitor would have to be fully robed with gloves and a mask to be sure not to carry out the bacteria to the common areas.

On November 27, 2013 Dan received the T-cell-depleted stem cell transplant from his brother. Dan recalls the procedure as 'anti- climactic' as they simply injected his arm with a small syringe of Jason's stem cells. However, it was anything but that- this was in a way Dan’s day of rebirth.

Not only was his transplant successful, but his recovery was outstanding. The first few days were not easy, by this time Dan was really feeling the effects of the radiation & chemo. He experienced lack of appetite, mouth sores, and weakness (plus some other fun things); a lot of the day Dan spent sleeping.  However, as he regained his strength the nurses were thrilled with how his white count was climbing and Dr. P agreed to release him on day +13 (13 days after the transplant), revealing to us that she had never discharged a patient that early.

Dan’s post transplant recovery was a pretty smooth process. He was able to maintain working from home. The time frame of recovery is typically benchmarked around 100 days- this allows the immune system enough time to recovery. So it wasn’t until late February that Dan could do more things in a public setting, go out to eat, grocery shop, go to the gym etc. He was on a restricted diet of cooked & pasteurized foods- NO SUSHI!! (basically a pregnancy diet). All of these things seem to be small in comparison to battling cancer; however, it was the small victories that he celebrated as well during recovery. Dan is currently still in remission and lives with his girlfriend in Jersey City. He is so grateful to the doctors and nurses at both Lennox Hill North Shore LIJ and Memorial Sloan Kettering Cancer Center. He would like to thank his loving parents, his brother Jason, and all his extended family & friends for their unwavering prayers and support. He would also like to thank his girlfriend Dana, for always standing by his side and being an incredible caretaker. 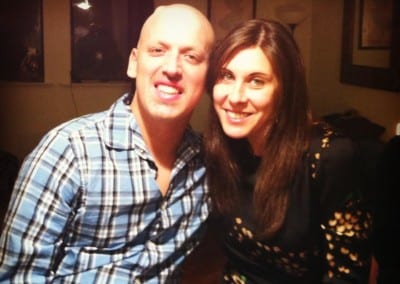 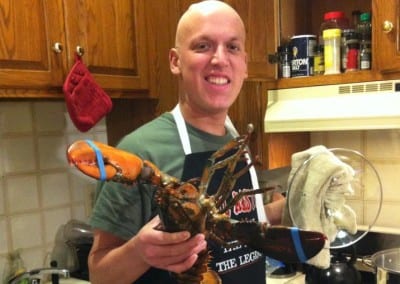 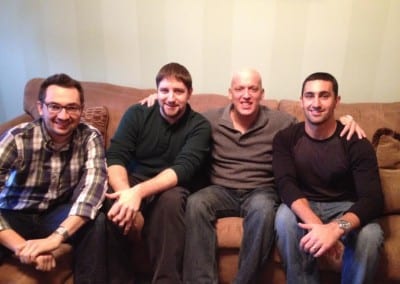 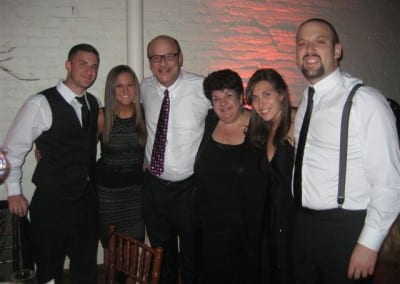 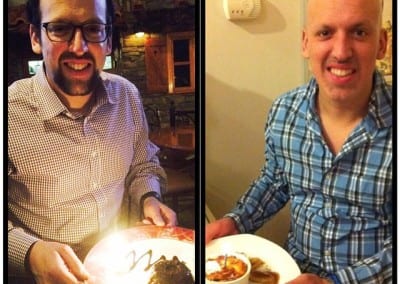 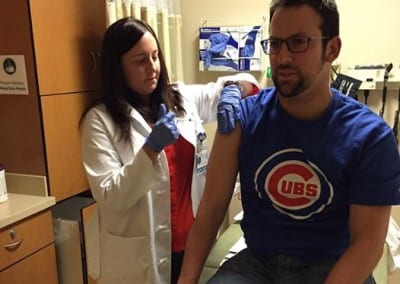 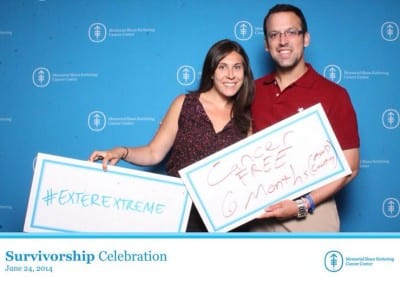